A Tour Around The Durrells’ Corfu Go on a journey to see Corfu locations related to the Durrell family – from their life here in the 1930’s, their popular books and the recent TV adaption. It comes alongside an interactive map, so you can visit the places for yourself while in Corfu or browse them from your sofa at home and plan ahead.

The famous books by Gerald Durrell and his literary brother Lawrence, as well as TV adaptations of Gerald’s Corfu Trilogy, have kept Corfu firmly on the travellers to do list. Now, more than ever, Durrell enthusiasts are keen to discover Corfu’s wonders since ITV’s hugely popular The Durrells hit screens in 2016. Despite tourist hotspots, Corfu still has plenty of green wildness, remote rustic villages, rugged mountains and crystal-clear waters; sites that the Durrell family and their readers would still find familiar as Gerald’s “paradise”. Alongside these treasures, there are also plenty of places that TV fans will recognise from the recent TV series.

So, let’s start our journey in the gem that is Corfu Town. This beautiful town is a jumble of tall, ochre-tinted Venetian buildings, imposing fortresses, twisting alleys, bulb-topped churches and grand palaces. Here in the old town you will find St. Spyridon’s church, the Contra Fossa, the Liston and the Palace of St Michael and St George, all used for scenes in the TV series. St Spyridon Church was written about by both Gerald and Lawrence and this beautiful Greek Orthodox church is the resting place of the mummified relic of St Spyridon himself. You will also find the Boschetto Gardens in Corfu Town, near the Old Fortress, with their bronze busts celebrating Gerald and Lawrence Durrell. All of these fascinating places are within walking distance of each other and a day (at least) in Corfu Town is highly recommended to all Durrellistas.

To the south of Corfu Town, you will find Mon Repos Palace, set in lovely, overgrown gardens. This was used in the TV series as the home of Countess Mavrodaki. In real the real world, this British built residence is now an archaeological museum. This imposing house was also the birthplace of Prince Philip when the Greek royal family were in residence in the early 1920’s. In My Family and Other Animals by Gerald Durrell, this palace is where Spiros comes to steal goldfish for Gerry from the King’s pond! Following the tracks through the gardens and woods, you will find a pretty bay and marbled-topped Venetian pier, recognisable to TV fans as a picturesque swimming spot in The Durrells TV series.. 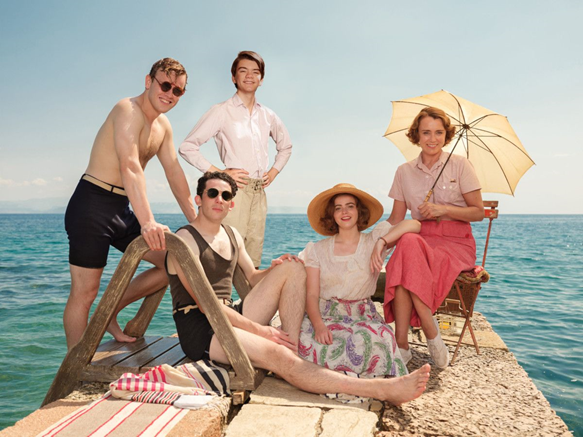 Out of town to the north of Corfu in Kontokali, at the beach called Sotiriotissa, is the house used as the family home in TV’s The Durrells. Now instantly (or Instagram-ly) familiar, this beautiful, old Venetian villa, overlooking the sea, was used for outdoor shots of the Durrell’s home. The interior filming was all done separately in Ealing Studios in London. 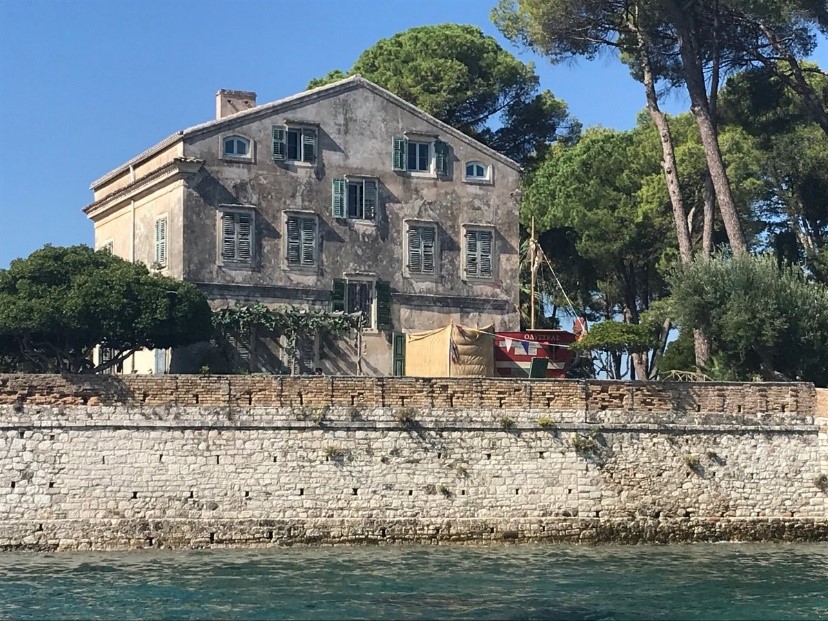 It is a private property but can be clearly seen from the beach below. On the other side of the dual carriageway, is the real Daffodil Yellow Villa, where Gerald lived with his family. Also privately owned, it is well hidden behind tall trees.

A regular TV filming location, standing in for Corfu Town or village settings, was Danilia Village or the Bouas Village, built in the 1970’s by Mr. Bouas to look like a replica of a 1930’s Corfiote village. Danilia was also used in the James Bond movie, For Your Eyes Only. Guided tours are arranged by the Grecotel Hotels in Corfu and once there you can wander through the empty marketplace, squares and lanes like a Durrells TV extra!

Travelling to the north-east of the island, you will find the small, sea-side village of Kalami. Here is the famous White House, formerly the home of Lawrence Durrell and his wife Nancy. Now running as an upmarket restaurant and guest house, in Prospero’s Cell this was Larry’s “unregretted home” for several years in the 1930’s. It is quite unique, in that it’s easily accessible to Durrell enthusiasts, still owned by the same family who hosted Larry and Nancy and looks little changed from old photos taken 80 years ago. A must stop place for Corfu and Durrell lovers, The White House Experience also offers tours of the house, a Durrell walking trail and a gift shop selling Durrell books. The White House at Kalami

Travel a little further west around the coast, to discover picturesque Kouloura Bay, which was the stand-in for Kalami in a Series 4 episode of The Durrells. 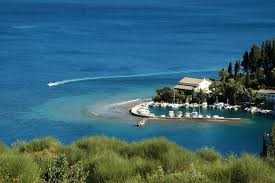 Also, on this coastline, only accessible by coastal footpaths or boat, are Erimitis Headland where the “spy” sailed away to Malta in the TV series and the lovely St Arsenios Chapel where Margo was sunbathing before an angry priest came and told her off. Back in the 1930’s, these remote bays were favourite sailing and bathing spots for Larry and Nancy who would sail there on their boat, the Van Norden, from Kalami. Finally, in the north west corner of Corfu, discover the stunning coastal landscape of Cape Drastis. Used in the TV series for many outdoor scenes and seemingly only steps away from the Durrell’s house, this beautiful view was often the backdrop to Louisa Durrell looking wistful or having a moment of peace from her eccentric family. 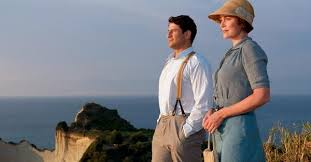 Louisa and Spiros at Cape Drastis

Hopefully, this blog will be the start of your own Durrell adventure in Corfu. One of the pleasures of Corfu is exploring the island for yourself – rent a car or moped, get on a bus or put on your trainers; then download the interactive map and go on your own journey to discover The Durrells’ Corfu!

Or scan this QR code with your mobile phone:

A beautifully, printed ‘Durrells Map’ is also available to purchase in the White House Gift Shop in Kalami and The Durrell Spot Shop in Corfu Town.